DJ Icy Ice has carved out a name for himself in the hip-hop community as a respected turntablist, radio station personality, entrepreneur and community activist.  Born and raised in Carson, California, Icy Ice's musical roots began as a b-boy (break dancing) in the 1980s, which introduced him to new muscal styles and led to his destiny with the turntables. It was then that Icy Ice began to create a name for himself by DJ'ing at local events, parks, school dances and local nightclubs.

In 1988, Icy Ice founded Legend Entertainment, a promotional group that hosts the largest 18 & over Asian nightclub events in the Los Angeles Metro area. In addition to LA, Legend Entertainment has also branched out its events to span San Francisco down to San Diego. Currently the group is expanding to New York and eventually along the east coast. 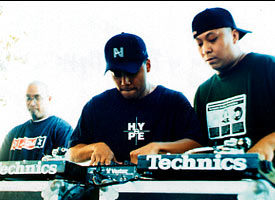 Four years later in 1992, Icy Ice became a member of the World Famous Beat Junkies, one of today's most distinguished and highly respected DJ crews in the world. Collectively, the group has travelled and competed worldwide, earning numerous accolades and winning several DJ championships along the way. During this time, Icy Ice broke into commercial radio in 1995, landing a DJ spot at the Los Angeles radio station KKBT 100.3 The BEAT (formerly 92.3 FM).  Known as "The Funky Filipino," Icy Ice can be heard spinning on the following shows: Midnight Madness" with PJ Butta, "Friday Night Beat Down" with Corndog, and "Saturday Night Live" with Eric Cubichie.  Producing the station's noon-hour "Old School Lunch Mix" show from 1998 to 2000 made Icy Ice a local celebrity in the southern California area, solidifying his status as a force to be reckoned with in the music industry.

Along with his fellow Beat Junkies crew, Icy Ice has revolutionized Los Angeles hip hop radio with a "trick mix" style of mixing, which has set the LA radio market apart from other big players such as New York and San Francisco, giving LA radio a flavor all its own. In addition to his work at The BEAT, Icy Ice is featured on the syndicated radio show, Superadio Network, which is heard on over 300 stations around the country. He can also be heard on Friday nights co-hosting with Fidel Rodriguez on Divine Forces Radio (Formerly Seditious Beats), an underground, 'conscious' hip hop show on KPFK 90.7 from 12:00 AM/PST -  3:00 AM/PST. Through Divine Forces, Icy Ice and Rodriguez expose and educate their listeners to the positive and innovative side of hip-hop music.

His revolutionary mixes on "Seditious Beats" drew the attention of KRS-One, which led to Icy Ice being recruited to DJ for his radio show "Temple of Hip- Hop" and to DJ on tour for the rap legend. Icy Ice can also be heard through the Internet on Chuck D's "BRINGTHANOISE.COM".

Icy Ice's illustrious career also includes involvement in a number of projects that continue to strengthen his place in music and his community. Icy Ice gives back to fellow DJs through his work with the Global Record Pool, which unites DJs from all over southern California to promote new music. In addition, Icy Ice's talents on the turntables are much in demand, having been featured on a wide variety of tours all over the world, including the U.S., Japan, Australia, Mexico, Canada and the Philippines.

With his celebrity status, Icy Ice regularly branches out past his musical realm and brings awareness to issues in his community, both local and cultural. Aside from his volunteer work, Icy Ice has been a guest speaker at various college and community conferences throughout the country, emphasizing the importance of hard work, perseverance, and the value of cultural diversity through his work as a DJ.

His biggest project to date is STACKS, The Vinyl Authority, which has quickly established itself as the premier source for vinyl to DJs and turntablists. Icy Ice's mission is to not only service the DJ market, but create an educational center for the Los Angeles and Orange County areas for music enthusiasts to learn about the art of turntablism and bring awareness and education in the hip hop culture.  His intense passion for music and educating the community are reflected in the store's outreach through in-store appearances and workshops.

DJ Icy Ice will be hosting a free seminar at the United DJ Mixing School on 18th April at 7.30pm.  Please email the school on natalie@djsunited.com.au to reserve your seat before 17th April. 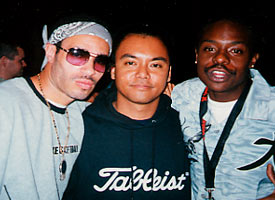