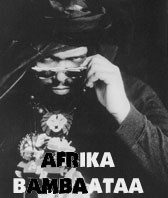 with Silverman and the Soul Sonic Force (#2), worked on the “Trans Europe Express” idea, resulting in the piece “Planet Rock” - one of the most influential records in music. Bam called the sound of the record “Electro Funk”, or the “Electro sound”, and he cited James Brown, Parliment, and Sly and the Family Stone as the Building blocks of it’s composition. By September of that year “Planet Rock” went gold, and it continued to sell internationally throughout the 1980’s and into the 1990’s. In the autumn of 1982 Bam and other members of the Zulu nation (Which included Grand mixer DST, Fab 5 Freddy, Phase 11, Mr Freeze, Dondi, Futura 2000, and Crazy Legs, to name a few) made one of their first of many trips to Europe Visiting Le Batclan theatre in Paris, Bam and the other hip hoppers made a considerable impression on the young people there, something that would continue throughout his travells as he began to spread hip-hop culture told around the world. Bam’s second release around 1983 was “Looking for the perfect beat” then later “Renegades of Funk” both with the same Soul Sonic Force Bam began working with producer Bill Laswell at Jean Karakos’s Celluloid Records, where he developed and placed two groups on the label Time Zone and Shango. He did “wildstyle” with Time Zone, and in 1984 he did a duet with punkrocker John Lydon and Time Zone, titled “World Destruction” Shango’s Album. Shango Funk Theology was also released by the label in 1984. That same year Bam and other hip-hop celebrities appeared in the movie Beat Street. Bam also made a landmark recording with James Brown, titled “Unity”. It was admirably billed in music industry circles as “The Godfather of Soul meets the Godfather of hip-hop”.

Around October 1985 Bam and other music stars worked on the antiapartheid album Sun City with Little Steven Van Zandt, Run DMC, and Lou Reed. During 1988 Bam recorded another landmark piece as Africa Bambatta and Family. The work featured none Hendryx, UB 40, Boy George, George Clinton, Bootsy Collins, and yellowman, and it was titled The Light. Bam had recorded a few other works with Family three years earlier, one titled “Funk You” in 85, and the other titled Beware (The Funk is Everywhere) in 1986. In 1990 Bam made Life magazine’s “Most Important Americans of the 20th Century” issue. He was also involved in the antiapartheid work “Hip Hop Artists Against Apartheid” for Warlock Records. He Teamed with the Jungle Brothers to record the album Return to Planet Rock ( The Second coming). Around the same period, Bam was involved in organizing a concert at Wembley Stadium in London for the A.N.C (African National Congress), in honour of Nelson Mandela’s release from prison. The concert brought together performances by British and American rappers, and also introduced both nelson and Winnie Mandela and the A.N.C. to hip-hop audiences. In relation to the event, the recording ndodemnyama South Africa helped raise approximately $30,000 for the A.N.C. Bam also helped to raise funds for the organization in Italy. In 1991 Bam received some notice for his remix work on the group EMP’s goldsingle “Unbelievable”. He also did an Album for the Italian Label DFC (Dance Floor Corporation), titled 1990-2000. The Decade of Darkness. By 1992 Bam had his own Planet Rocks Records label, releasing Time Zone’s Thy Will “By” Funk LP in 1993.Bam’s Time Zone recorded the single “What’s the name of this nation?........Zulu!” for Profile Records. Toward 1994 Bam regrouped his Soul Sonic Force for the album ominous Isthumus. In that same year he began deejaying on radio station Hot 97 FM in NewYork City on Fridays ,hosting the show “Old School at Noon” Sewed singles ,”Planet Rock” by Afrika Bambatta and the Soul Sonic Force (1982 ,Tommy Boy);”Looking for the perfect beat” ,”Renegades of Funk” (1983, Tommy Boy). Selected albums/CD’s;World Destruction by Time Zone (Iraq ;released 1992 ,Metrofone 72661);The Light (1985 ,Capitol 90157),Planet Rock (1986, Tommy Boy 1007),;1990-2000;The Decade Of Darkness, by Afrika Bambaataa (1991 ,DFC?EMI 1062 );Thy Will “B” Funk by Afrika Bemata Presents Time Zone (1992,Planet Rock.) Collaboration with Leftfield called “Afrika Shox” (Sony Music U.K.) 1999 Collaboration with Uberzone called “2Kool 4Skool” (City Of Angels) 1999 Collaboration with Westbam called “Aghartha” (Low Spirits) 1999